In Conversation with Simon Evans

The director talks about his upcoming show with Small Things Theatre and why he loves monologue plays….

BOOK YOUR TICKETS FOR LEAVES NOW 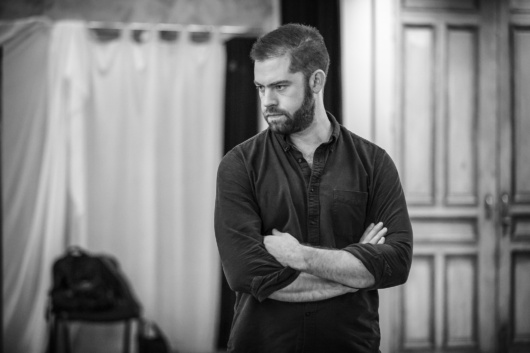 What attracted you to directing the piece?

The first thing is the pleasure I take in working on monologue plays. I was lucky enough to direct Will Eno’s THOM PAIN (BASED ON NOTHING) at the Print Room a few years ago, and fell in love with that kind of writing. That play lists two “Characters”: Tom Pain and the Audience, and that felt like a wonderful approach. We do this kind of work because the audience and the character exist in the same space, they are conscious of each other, they need something of each other. You are more active, as an audience, than you are at any other kind of theatre. I should qualify, I don’t like “Jackanory” plays: anything that goes “Sit down, I’m going to tell you a story” because I struggle with the conflict there. If a character knows his or her story and is comfortable enough to tell it in an objective way, it looses it’s dramatic appeal: it might as well be an audiobook. But if a character, for one reason or another, decides to share something subjectively, for the first time, with a group of strangers, we get to ask why: what does the character need from them if he’s going to unburden him/herself in this way; and what does the audience feel in being drawn into it. It offers lots to play with.

The second thing is the chance to work on another of DHW’s plays. I’ve been a fan for a long time and have been lucky enough to be work on a lot of the collection in one way or another. It’s a remarkable voice: gentle, inclusive, tragic (all the best words) and LEAVES leans a little further into the magical too. And that’ll always appeal to me. It’s also a treat to be working with David again, who’s an extraordinary actor. We first worked together a number of years ago on a fringe production of CYRANO, so we have history with romantic-tragedy.

And it’s about love and books. End of.

The performance is set and staged in a bookshop. What does this setting bring to the piece that a conventional theatre might not? Do you prefer found spaces to traditional theatres?

I’m lucky in the opportunities I’ve had to make use of found spaces. I did some work with Secret Cinema a few years ago, taking over old schools and town halls, then directed THE DAZZLE and BUG in the old Central St. Martin’s Art School building on Charing Cross Road (or “Found111” as we called it). Even when they gave me a proper space at the Donmar, I shook it up a little and converted it into a 1930s speakeasy. There’s a thrill, I think, in breaking up the routine of going to the theatre. Nothing numbs our sensibilities more than familiarity, the idea of going to the same theatre space, sitting in the same seat, knowing where the bathrooms are and how much a Gin & Tonic will be in the interval, it all anathema to having an open experience. The joy has always been in bringing people somewhere they don’t know, or changing their impression of somewhere they do know, and using that as a tool to break down defences slightly.

The impact is stronger still if the environment really suits the subject of the piece, because then we’re talking about a complete experience. It was thrill to bring an audience into a dilapidated loft space filled with clutter, to meet the hoarding Collyer brothers in THE DAZZLE, and similarly, LEAVES is a story about a writer and his experience of the damage that words can cause. To do that surrounded by books is the perfect backdrop. Even if I was doing it in a more “conventional” theatre… I think I’d have still built a bookshop on stage.

You’ve worked with some of the biggest names in theatre at the most renowned venues but also work with companies and artists on the fringe. What are the challenges and what excites you about both?

I don’t know that the experiences, from a Director’s point of view, are as different as we might imagine. The idea is always to try and create a connection between audience and play and that’s universal. Working at some of the top theatres affords you greater resources: the budgets are bigger, the creatives you get to work with high profile, the actors you get to talk to are very exciting; but creating a connection with the audience can be harder in those high profile theatres, because the audiences (and even some of the creatives) are set in their ways.

On the other hand, I’ve worked quite a bit at the Vault Festival (and will be back there in a fortnight with VANISHING MANKIND) and the thrill there is how up-for-it the audiences are. You can push them and demand things of them: including them in ways you wouldn’t dare in more established spaces, because they’re there to see something more febrile. It was interesting to work with (another phenomenal David in my life) David Aula on THE VANISHING MAN: asking audiences to say lines, leap up on stage, perform effects with us, all of which they did enthusiastically; only to then head to the Donmar for RESISTIBLE RISE OF ARTURO UI, to find people going “You can’t do that.” You can, and we did, but that was seen as controversial.

I’m lucky in the people I’ve worked with and how they’ve encouraged me to think about how we use theatre to connect with the audience, and the major difference (I would say) is the audiences, not the work we do.

Why should people come to see Leaves?

A chance to see a beautiful story, beautifully told, in a beautiful shop. And it’s short, so there’s plenty of time for a curry afterwards.

BOOK YOUR TICKETS FOR LEAVES NOW