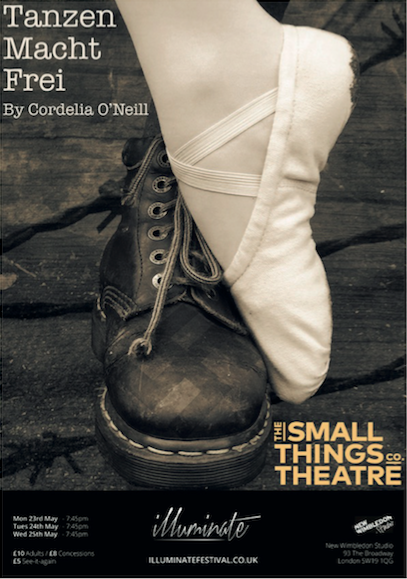 ‘NO PLACE FOR A WOMAN’

“It’s just like a story, a different kind of story, it’s my story”

The Small Things Theatre Company returns after a sell out run of Cordelia O’Neill’s The Stolen Inches (****The Stage, ****A Younger Theatre, ****EdFringe Review) at the Edinburgh Fringe Festival in 2015 with her new play Tanzen Macht Frei accompanied by live original music from Elliot Rennie on cello.

The wife of a Commandment of a concentration camp is throwing a party. Sadly there is no champagne. Instead her husband brings her a young Jewish ballet dancer from the camp, and both their lives change forever. The story of how two women are struggling to survive in Nazi Germany begins to unfold and we see how “Tanzen kann euch frei Machen”.

A heart-wrenching drama that takes us into the depths of the minds of those on both sides of the war and questions whether love and allegiance is ever straightforward.

Cordelia O’Neill is a writer, actress and co-founder of The Small Things Theatre Company. Her other writing credits include The Stolen Inches (Edinburgh Fringe Festival 2015), Living in the City With Or Without Sex (Writers Bloc, Old Red Lion Theatre) and Guys Do, Girls Don’t (Monologue Slam). She has previously taken part in workshops with the Soho Theatre Young Writers Programme.